The function of the lovely Mycenaean figurines these idols are inspired by is unknown: they may have been children's toys, votive figurines, or grave offerings... 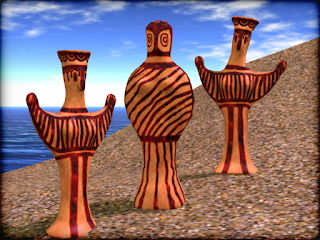 Read more »
Posted by Raindrop Drinkwater at 21:10 No comments: 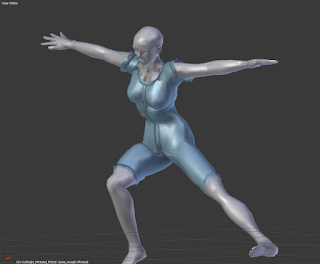 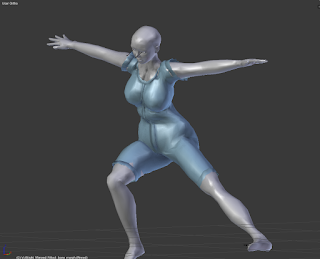 It's far from perfect, but I can say I'm finally getting the hang of it. The pictures above are the same mesh, fitted to the avatar (default size and large). And a bit of poke-through.

The one thing that took a while to click was how the normal bones interacted with the collision bones. You'd think weighing entirely on the collision bones would work. Nope. Sometimes you want the vertex to move with the skeleton, but you don't want it to shrink / grow as much as it would if you assign it all to the collision bone - that's where the old classic bones come to the rescue. They move, but they don't swell! Good old bones!!!

Posted by Raindrop Drinkwater at 18:46 No comments:

Incredibly happy with that one, mainly because of the way I modelled the counter: I mostly used non-destructive modelling, by using array and curve modifiers instead of polygon modelling. It's very satisfying to see how a couple of functions turn a plane into something magical! 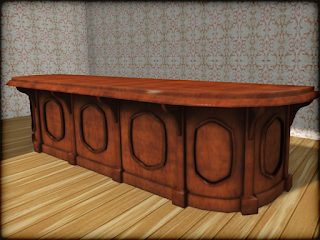 I didn't plan ahead enough to make it easy / practical to create more shapes with that particular counter, but now that I know how to do that, I might be able to re-use that method more efficiently next time. In the meantime... item description!

Read more »
Posted by Raindrop Drinkwater at 09:22 No comments: 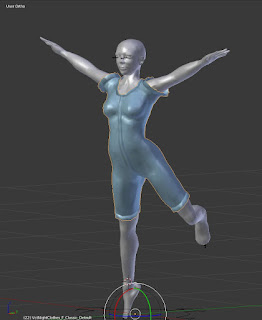 Avastar is an invaluable tool. I probably could've reached the same point without it - but it would be a lot more difficult.

Posted by Raindrop Drinkwater at 17:58 No comments: 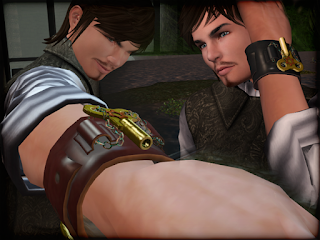 Either way, you've certainly found yourself in a situation where you had to fix things *now*, and couldn't waste time remembering where you'd put your key last night.

Our solution? A durable leather bracelet with standard-fit automaton key included. Genius? Yes, we like to think so.

Read more »
Posted by Raindrop Drinkwater at 11:53 No comments:

Mr Hataway sports a mighty moustache. That, in itself, would be enough to justify his presence in your home. But that's not all. Mr Hataway also has a very important role in your daily life: he will wear your hat for you! 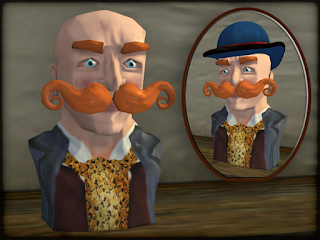 That's right! These awkwards moments of looking for the perfect spot to put your hat (on those occasions where you definitely don't want it on your head) are a thing of the past. Just put it on Mr Hataway. He'll be glad for that, for he hates being bare-headed. And with his fearsome looks, no one will *dare* steal your hat. Nope siree.

Mr Hataway is also known for his poor eyesight, so he'd be very happy for you to lend him a monocle, too.


Technical bits: first, let me mention that the hat isn't included. It's a Bring-Your-Own deal! Mr Hataway is copy-mod, so feel free to resize if you own a giant hat.

Finally, Mr Hataway uses advanced lighting materials, but the diffuse is baked in such a way that it looks good with basic shaders as well.

Get in in SL - on the Marketplace

Posted by Raindrop Drinkwater at 17:16 No comments: 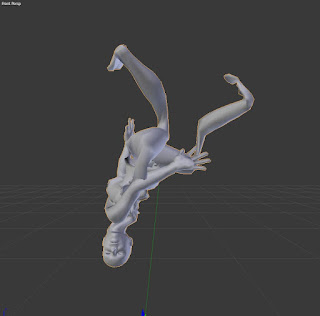 Posted by Raindrop Drinkwater at 20:09 No comments:

Well, can I say? I like hats, and although the Bowler hat is perfect for everyday use, sometimes you need to make a statement! So here's our second hat: the GentleMad Top Hat. :-) 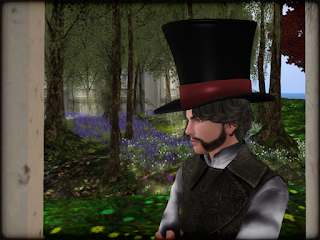 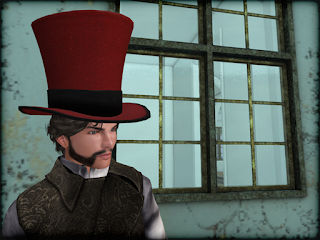 Read more »
Posted by Raindrop Drinkwater at 10:22 No comments:

I've given my favourite little hat a massive update :-) 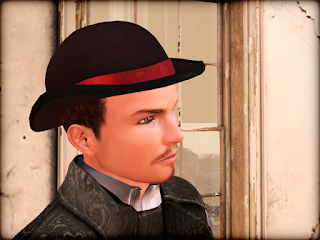 That's something I've wanted to do for a while. I've completely remodelled the hat, and it also comes with new textures:
- four colours for the hat: black, blue, red, and a tint-friendly white
- and the same colours for the silk ribbon

Colours are controlled by a hud (Now that was an adventure! It works great, thanks to Abyssin, but we had quite a few laughs while developing it.).

It's still got a resizer in it, and of course it's mod-enabled. If you want to use it as a prop: nuke the scripts in it, and watch the Land Impact shrink to a very friendly "1".

Anyway, description and links below:

Read more »
Posted by Raindrop Drinkwater at 18:39 No comments:

OMG I'm so excited about this! I posted about the (pretty advanced) WIP a couple of days ago; my steampunk goggles are now finished, optimized as well as I could, and live on the grid! Do I like them? Well, I can't stop taking pictures of the bloody things, that's how much I like them. 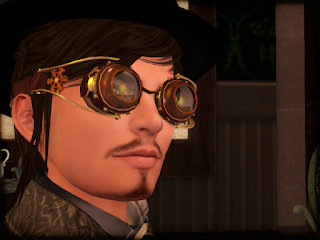 I'll just copy the product description below, for the sake of appearances, but basically what I really want to say is: OMFG!!!! I MADE THIS!!!!!!!! Ahem.


Read more »
Posted by Raindrop Drinkwater at 12:05 No comments:

WIP I'm working on. It's quite ouch so far in terms of number of tris / vertices, so I'm not convinced I'll inflict it on the grid yet. I'm hoping to get it down to manageable levels, because I'm really happy with the modelling: 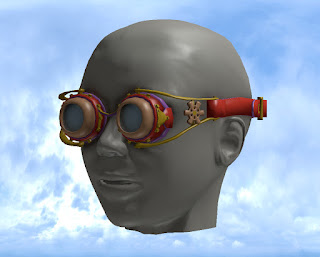 I haven't tackled the texturing yet... but I've baked the main maps (ambiant, normals and so on). And, well. My UV maps are naughty. What can I say, I'm a natural!!!! 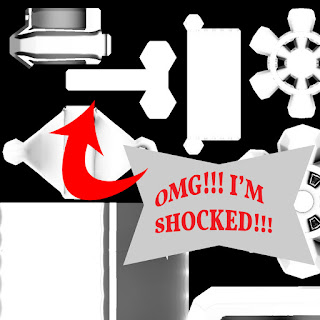 Posted by Raindrop Drinkwater at 22:27 No comments:

The new me... is just like the old me

I've been enjoying a rather stable internet connection this last couple of weeks, which prompted me to give SL another try (after a number of failed attempts that were not Second Life's fault, for... gosh, at least a year if not more). 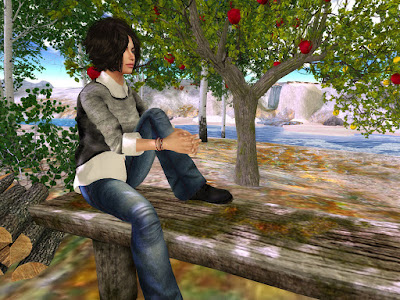 Considering I already looked a bit "vintage" last time I logged in, you can imagine I really needed to update my AV. So I went shopping for NEW things, and I made a point of avoiding my usual haunts. Mainly, that meant: no ColdLogic! No Lassitude & Ennui! No Exile! Although I did grab some demos.

I wasn't too sure what look I was going for, but my goal was to try something new. I totally failed, btw. Still, I had a list of things I wanted to avoid:
- Total fantasy gear, like elves and stuff. One of my alts is much better at that than Rain will ever be. Besides, I already have a totes awesome FateWear gown + Illusions mask + a pair of L&E ankle boots that I see no need to replace.
- Latex / kink. I have plenty of it in my inventory still. I used to make the stuff ffs. I know it's dated, but... been there, done that, will probably do again when I feel like it but not now!
- Casual, reasonable girl look... That's too easy a trap for me to fall into.

I fell into another pit-trap of mine: the tomboy. Basically, Raindrop looks like RL-me with a better haircut. Mind, I like it a lot! And I did find some really cool stores in the process. :-) 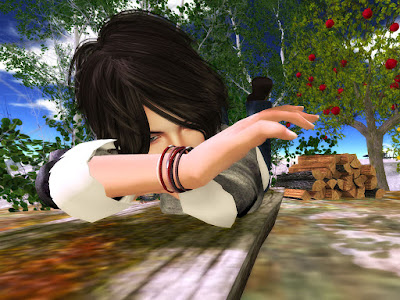 
Conclusion:
I'm satisfied with the head. I'll have to play with my shape underneath so that I can use my "normal" eyes, and once that's done, I'll be a happy bunny.

Other new stuff: the hair (I love what Dura does), the bracelet (perfect! I also got some colourful bangles for cheap, and they're awesome!), and the sweatshirt. Now, I wish the shading weren't as strong - the contrast between the back of the garment and the front is rather too stark. This wasn't noticeable on the demo, which was very dark overall. Apart from that, it's quite lovely and I can see myself wearing it often. I'm just disappointed I didn't go for one of the more punkish versions of that top. I'm such a chicken!!! :-D

Posted by Raindrop Drinkwater at 16:09 No comments: