I'm getting addicted to Mycenaean pottery. I like how stylised the designs are; they lend themselves very well to vector art. I've started another jar (not a stirrup one this time): 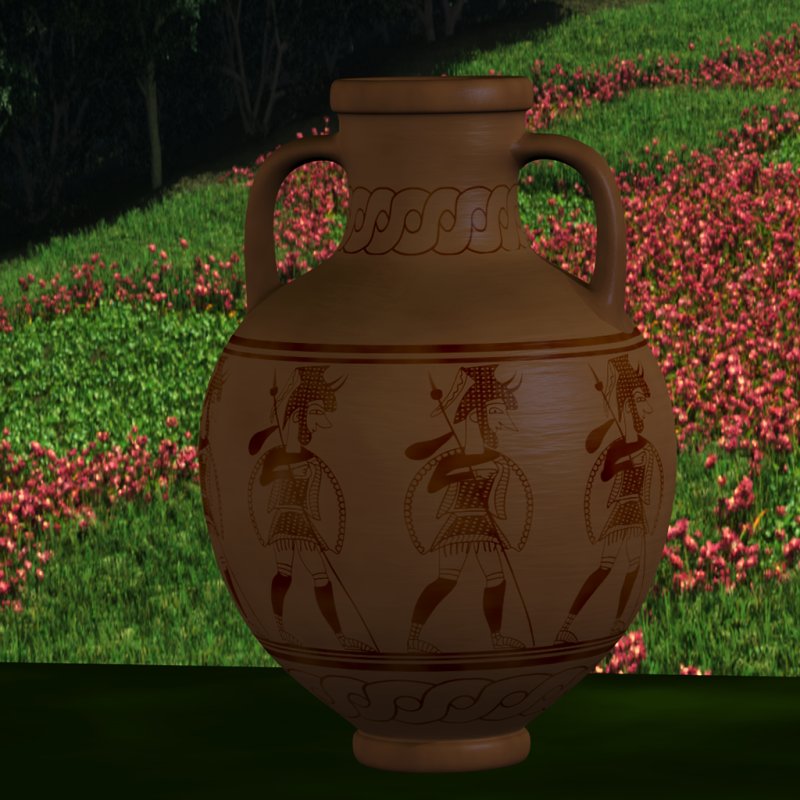 It's an early WIP. I've almost finished placing the patterns, but I need to roughen them up a bit. Maybe add some grass at the bottom... and something on the handles. I also haven't touched the rim and the bottom yet. The handles is actually a separate material at the moment, which is why there's a seam showing.

The opening is wide enough that I've had to solidify the jar -- i.e., there's a complete inside. It might end up having more land impact than the stirrup jar, although not by much; we'll see. I haven't taken it into SL yet.

On the minus side, I'm really annoyed that I can't seem to bake a texture map from Blender when using material nodes. It just bakes the diffuse colour... Unless I'm missing something, but I don't think so. Ah well, I'm getting there anyway.
Posted by Raindrop Drinkwater at 12:45 No comments:

Fooling around with Inkscape

What I like about trying out a new software is that crazy phase of experimentation where I just press buttons with no idea of their function. I've created a lot of vector soup in Inkscape, following that method... and also something that looks a bit like a necklace: 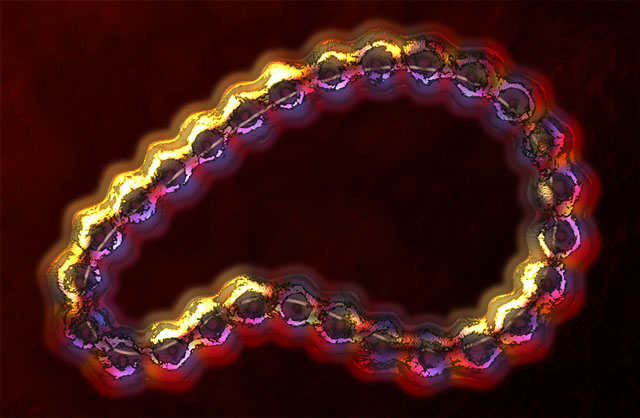 Fun! I might use that filter again. It's still nowhere near as cute as the Kokeshi Doll I made, following this tutorial that I've already linked to in an earlier post -- it deserves another link because Awesomeness!. 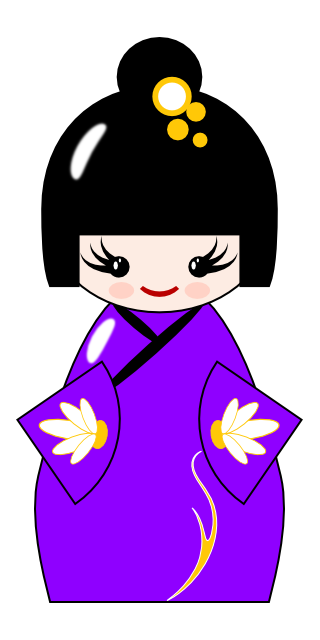 Try it. It's easier than it looks.
Posted by Raindrop Drinkwater at 12:22 No comments:

Email ThisBlogThis!Share to TwitterShare to FacebookShare to Pinterest
Labels: WIP

This stirrup jar comes all the way from the Bronze Age.

The pattern, although heavily inspired by talented Mycenaean artists, is hand-drawn (hand-vectored-and-painted, technically!). The materials use custom specular and normal maps. 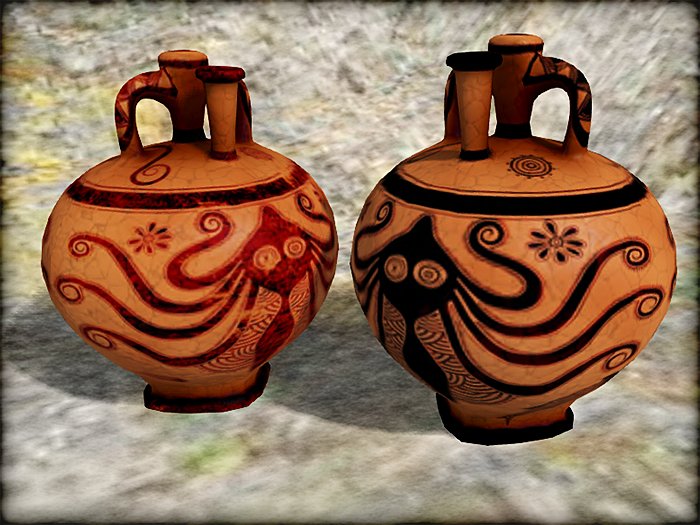 Featuring original mesh and textures, your Stirrup Jar also benefits from fine-tuned Level of Details and Physic shapes. What it means to you is that it'll look good up close and personal and from afar too, while still keeping a reasonable land impact.

Get it in SL
Get it on the Marketplace

Raindrop and Abyssin
Posted by Raindrop Drinkwater at 20:40 No comments:

Email ThisBlogThis!Share to TwitterShare to FacebookShare to Pinterest
Labels: Bronze Age, Our products

Oh Hello World. I'm done hibernating for a while, and I have a computer that works!

After this long break, I decided to start getting back into 3D modelling with an easy project: a vase. Sounds reasonable, right? So I grabbed some references of Mycenaean pottery, picked up one I liked, and started modelling it.

That was easy enough... but the texturing? Silly old me picked up a model starring an Octopus! Gaaaah! I first painted it directly on the surface of the jar in Blender, just to give me a rough idea, but I then had to clean it up... Vector sounded like the way to go.

Did I have a proper vector-editing programme? No, of course I didn't. So off to Inkscape I went. It's open-source. There's some nice tutorials for it (go to Inkscape kokeshi dolls for awesomeness), and if you already know the basics of Bezier curves, it's actually not that difficult to use.

Then I started adding details... Dear-y-me.

So, work-in-progress of what was meant to be a 1-hour project, and is turning into something a lot more involved than that: 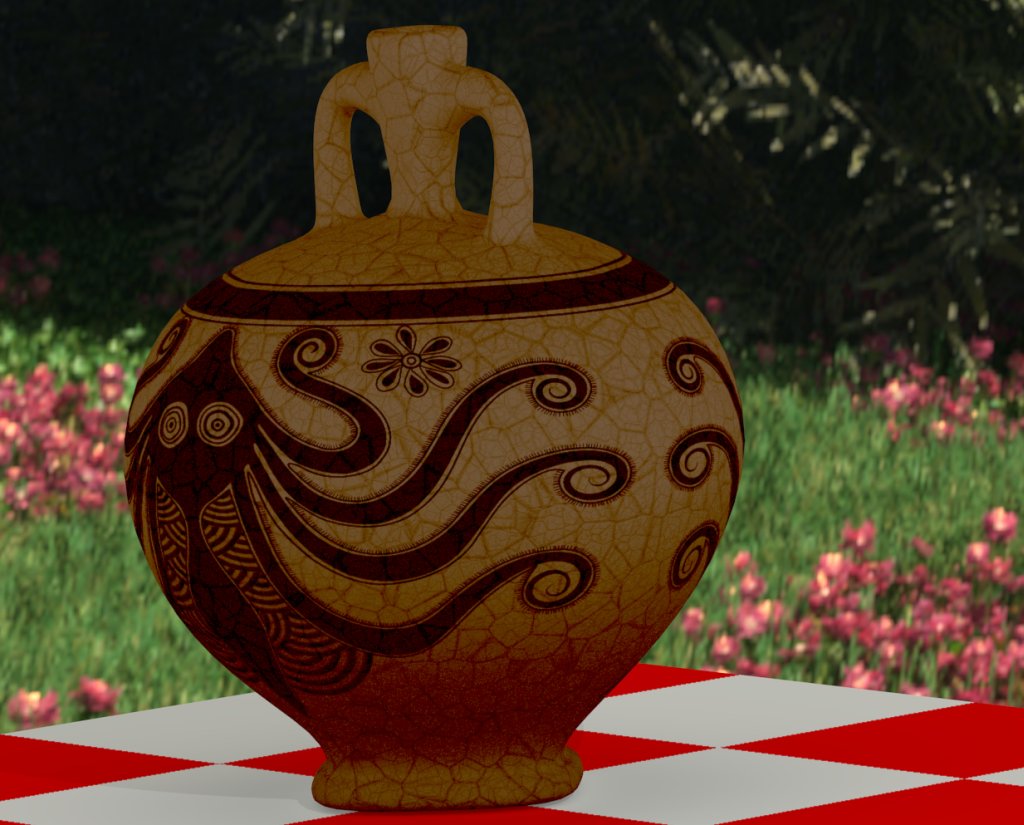 That version is a couple of days old. I've since realised that there's a third bit poking out the top -- and that my jar is what's called a stirrup jar, i.e. two handles and a beak. I've added the beak, presto! It means a new UV map, but it's an improvement on the old one so I don't mind a bit.

The texturing is super-temporary, I've added some fish below the octopuses and scale patterns on the handles. I still need to populate the top of the jar.

I'm quite excited about it. I've learned a lot already... including, and that's not the least of it: how to spell Mycenaean and the plural of octopus.
Posted by Raindrop Drinkwater at 19:00 No comments: