(Note: This is an almost word-to-word copy of a post I made on SLUniverse)

Cloud Party is a new virtual world that runs within a standard browser. At the moment it only allows you to create a permanent avatar if you log in from your Facebook account (which I won't do); you can also start a temporary session with an anonymous avatar.

I've given it a try last night, and just now again (with an Anon account), and I'm of two minds about it.

I'm impressed by the texturing capabilities (normal maps!). It has the potential to look great.

I quite like the idea of showing separate islands as floating bubbles. The cell phone is great, really unobtrusive - really, really cool. Moving around felt intuitive. The double-click-teleport is super smooth.

I also liked how easy it was to change the shade of the outfits. The colour picker is neat.

What could be improved, imho:
- Inventory. There's no way that will scale! And while storing tops in one category, and bottoms in another, is a viable option in some cases, it's definitely not a one-size-fits-all. Let's say I buy a swashbuckler outfit, a casual one, and a kinky one. With that system, they'll be split into tops/bottoms/shoes, and mixed with each other - not that convenient.

- I started out with a dude. He had T-Rex arms syndrome. I maxed out the arms length, and that's *just* enough. I didn't play much with the other sliders, so I can't comment on these.

- Couldn't find a way to tweak the head -- at the moment it looks like you'll have to get pre-set heads, but won't be able to customise them.

- Couldn't see a way to switch from a male to female shape for the same character. I don't see non-humanoid options, but that, I hope, might come in the future.

- Animations: can I stop running? can we fly? I love flying. PageUp didn't work, but that might just be the wrong key.

My biggest issue, however, is that it feels a bit disjointed. It's hard to describe; it's almost like the avatars have no weight, if you see what I mean? Or almost like they aren't really part of this world. I tend to relate to toons, even temporary ones, almost instantly -- but it didn't feel that way this time. It might be caused by how far away the camera is by defaults, for all I know. Or the shading might be subtly different. Dunno.

I had the same feeling in Blue Mars.

In the meantime, I don't think I'll log back in all that often... that might change once I can create a permanent toon.
Posted by Raindrop Drinkwater at 15:44 No comments:

Email ThisBlogThis!Share to TwitterShare to FacebookShare to Pinterest
Labels: Other worlds, Pictures sorted

Knottic is a celtic-style birdbath that features celtic knots lovingly engraved on its sides, water, a little fountain, a soft shadow for the ground, and two couple poses for Petites. 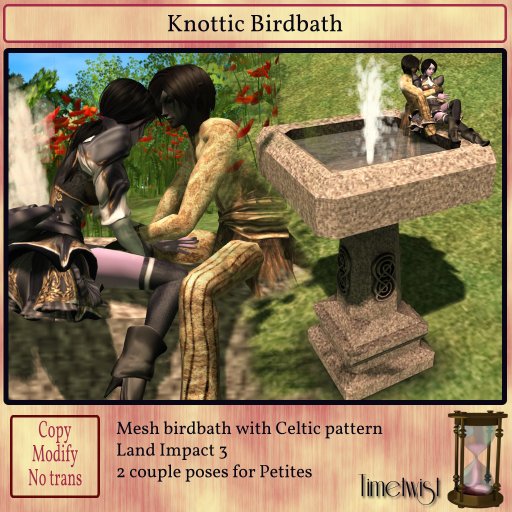 Get it on the marketplace

Get it in SL


Read more »
Posted by Raindrop Drinkwater at 12:43 No comments: