Strangetown 01.03: The Curious and the Beakers

The Curious are such a fun family to play! I love them to bits. Unfortunately I don't have many pictures of the early stage. It doesn't help I lost a lot of them in a clumsy clean-up. Oops.

Anyway, Vidcund got abducted (duh!) and rolled wants for Lazlo to Meet Aliens Come on little brother you'll love it you know you want to!!!! . He was pregnant up his eyeballs, but no matter. Seriously Vidcund, that's just mean.

And before you ask: Nope Siree. I didn't let Lazlo be abducted.

Pascal gave birth to a girl, Tycha, and fell in love and married Nervous Subject (how unimaginative, I know). Lazlo, meanwhile, met Adrianna Bransfield the Infallibly Good Witch on a community lot, can't remember which, and instantly fell in love. So did she.


Tycha's amazing. What she lacks in nasal function, she more than makes up for in the personality department. She's just... I don't know. I just love her. And she's not ugly at all - she's quirky, sure, but charming in her own way. A Virgo (stats: 10-5-10-0-6), she's a film and literature buff just like her dad. And even though she's super serious and a neat freak, she's very subtle about it.

Basically, don't say anything bad about my Tycha, because I'll Grrrr! at you!

(I've since found another haircut for Pascal, similar to this one but fitting his forehead better).

Vidcund gave birth to a girl, Stezka. As a toddler, she's adorable as they come but she scares me: neat freak, hyperactive, max playful... and a grouch. And cute. Super cute. I'm *not* looking forward to Stezka growing into a child, let alone a teen. I'll be in a world of pain with this one, methinks.

Obviously I love her too.

(I've since found a better moustache for Vidcund. I still need to fix his eyebrows!)

Pascal and Nervous both wanted a baby, so Pascal used Mad!Scientist!Skills gathered on the alien ship to impregnate Nervous. I also changed their wants from "Adopt a baby" to "Have a baby" in SimPe, 'cuz I could, and unimportant things like biology won't get in the way of my guys's aspiration points, dammit! Anyway, it's a boy:

Ariu, as in Ariu Curious. (Sorry.)

Nervous is a dotting father. He also loves his nieces Tycha and Stezka - especially Stezka. Seeing him interacting with the rest of the Curious household, you'd almost forget he's a grouch.

He's lost the mohawk. I tried living with it, but eventually, it had to go.

Meanwhile Lazlo got Arianna pregnant (yay ACR! They weren't trying; that's my first actual accident!); I moved them out before Arianna's baby was born, because it was just getting a bit crowded in the household. We'll catch them up later, but in the meantime:

Hipster! :-P He's adorable, even though he's lazy and a slob - not a good combination for me. I make him clean his own puddles, and he hates me for this.
Suck it up, Laz.
I found him a job as a journalist. I think he'd be better suited as a slacker, but that wasn't available at the time. Oh well.

Adrianna-of-the-mouthful-name is cute. Oh yes she is. She's also a perfect slob and a lazy arse, just like Lazlo. No wonder they hit it off.

I'll leave this family for now with a picture of Child!Tycha:

Vidcund, when he wasn't busy trying to get his younger brother abducted, only had one woman in his mind: Circe. I didn't do anything about it until she turned up and rang the bell one morning, while Vidcund was on maternity paternity alienity leave.

I'll admit I made her selectable, allowed them guys to try for baby when unmarried, and let revenge!sex run its course. Still, what happened next was entirely their decision.

Circe barely had a crush for Vidcund (I'm really shocked they tried for baby - man, she's cold!). Once back home, she must have felt the need to hide her mischief. I kid you not, she rolled the want to gain creativity skill points - and the obvious way of doing that at the Beakers is...

Loki looks similar enough to Vidcund that he might never notice - that's what Circe's betting on, anyway.


It's a girl, Mary. She's got her father's eyes, skintone and hair colour. That's not giving it away. Well played, Circe, well played.

Loki's starting to suspect something, though. Circe's been a bit different. He's the one initiating all the kisses, caresses, inappropriately-timed woohoos... He doesn't get it. And he's still craving for a baby.

(That's not a plumbbob floating above Loki's head, it's an actual, honest-to-goddess, spaceship. Yep.)

Vidcund's met aliens, too, and it's worked for him, hasn't it? He's the talk of the town. Maybe if Loki looked a little bit more like Vidcund, too...

Circe will look at him again, surely?

That's quite timely, because little Mary Beaker needs a lot of attention - the trouble is, Circe would rather be at work. Loki ends up on babysitting duty. And he loves it. To the point that he's the one in charge of making sure Mary grows into a healthy toddler:

Btw, does Shea Johnston pop up like magic whenever there's a baby or a toddler in your hoods too? 'cause, he's nice and all, but methinks he needs to find a wife and have loads of widdle babies.

Mary has her father's nose, but apart from that... She's very close to Loki, and one couldn't really tell they're not related. He absolutely loves her.

I can't exactly remember Mary's stats, but basically, she's okay. Another neat freak, though. And three nice points -- which is ample, and a miracle, considering the parents. She's very cute, although she doesn't have Stezka's adorableness - but she's a bit quirky, like her cousin Tycha.

Circe still hadn't rolled any "serious" wants related to Mary, and Loki wasn't going to no matter what - so I got Loki to give that poor child some much needed TLC. Snuggle, tickle, teach to walk, you know the drift.

Can you guess what's Mary's true hobby? Come on, I'll give you three chances.

I didn't know barfing on people was such a good way of raising relationships.

That pink tracksuit with a pacifier on the back? ON LOKI??? ROFLMAO.

(Gosh, that's getting a bit long, innit? And not a single "studio" picture! It's all live!) 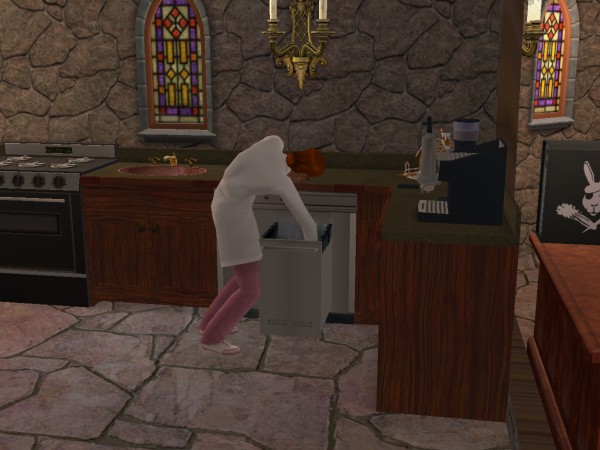 The trouble with neat freaks is their obsession with the trash can.
I put a chute in the Curious's house, but I can't really do that here... it doesn't seem right! So anyway, after taking out the trash for the 100th time that day, Circe broke it.

She thinks she's a hot shot at mechanics, so she gets a chance at fixing it.

Well, she didn't die. I'm reasonably pleased about that. Loki almost burnt his omelettes, but didn't, so that's good too.

Circe lost a cleaning skill point, which must have hurt her pride even more than the electrocution itself. But proving she's not a coward, she immediately rolled that want:
Anyway, I can't end this post without more cuteness: 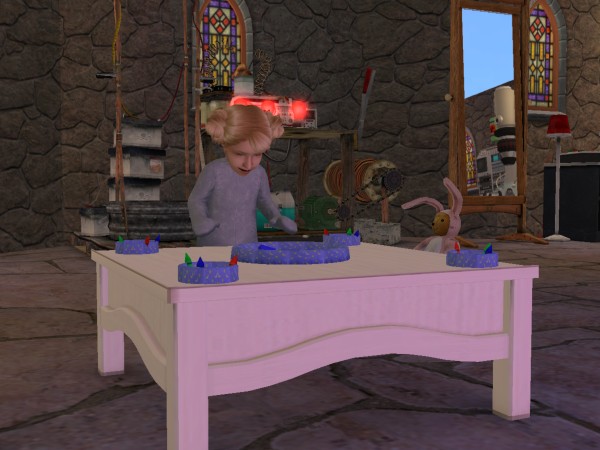 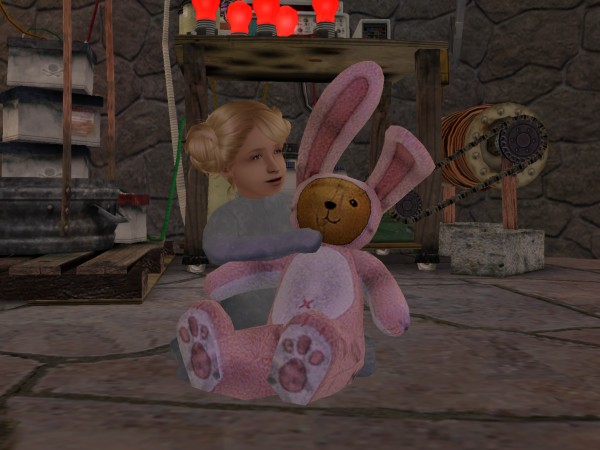 Phewww. Next time: the Singles*, who've messed up all my carefully laid plans, and don't I love them for that!

*Unless I change my mind.
Posted by Raindrop Drinkwater at 22:09