*knock knock* Is this thing still on? 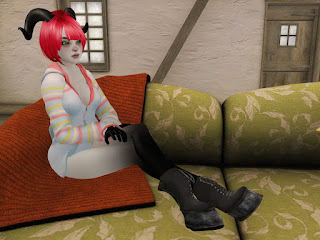 I've mostly been using my computer to fry eggs lately (i.e. overheating issues). It's sorta OK now, though I try not to push the old thing too hard, LOL.

Anyway, I've splurged for Utilizator's Avatar 2.0, a body I've had my eyes on for a while. This anime-style body's been around for a while -- I believe it was one of the first mesh bodies to hit the grid, and Utilizator is the one who came up with the alpha system that we're now all familiar with. It's now partially fitted / bento-enabled.

It comes with a bento mesh head (M3), which responds to sliders. It comes in with a few basic skin tones, easy-to-tweak eye colours (with built-in heterochromia), etc. You can also use the standard Linden eyes. A fun thing is that you can apply skins and so on to the left or right side of the body only -- potentially very useful while creating alphas, with one side being used by the LL UV grid and the other by test versions of the alpha.

The Pros:
- It's MOD-enabled. OMG L-O-V-E.
- It's cheap: 600 L$, and updates are free.
- I find it super-cute.
- The dev kit is available for free on Utilizator's website.
- Low impact. Much appreciated!
- Four chest options, including flat -- great for androgynous looks.

The Cons:
- No demo. That's a big one. That's the reason I passed it up for so long actually.
- Limited alphas; however, considering the body is mod, it's entirely possible to create your own (texture) alpha -- assuming you also have a full-perms skin texture. I haven't tried, mind you, so it might not be as doable as I think it is!
Utilizator has said that he'll implement SL's Bake-To-Mesh feature, once it's available, so that should really help.
- Limited support for clothing. Kemono (another body by Utilizator) gets all the love, but the large hips really aren't for me.

I still managed to find some clothes that fit, or mostly fit with minor clipping issues. See pics below for an example: 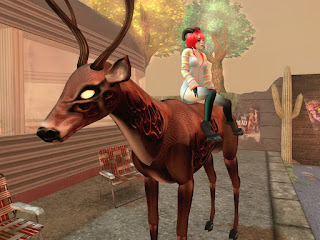 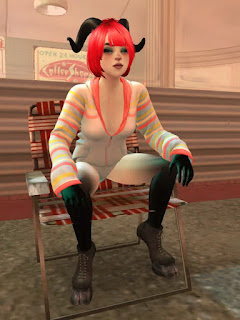 Goji's romper fits with minor clipping issues around the boobs that I couldn't fix with the HUD's alphas. It's not designed *for* Avatar 2.0, so fair enough, and I'm happy with how it fits overall.
The "Stripe" version comes with four colours. There are other colourways available, too.

Lunar Cult's almost-free skin is great, and makes for a perfect base to combine it with Elleria's hooves/shoes.

By the way, do try those new Linden Lab avatars. They're much more kitbashing-friendly than the previous versions!

Re. location: Olivia's Creepy Diner does what it says on the tin. It's spooky! Perfect, because I heard some really creepy stories last night at a local (RL) even, so I was in the right mood for this.
Posted by Raindrop Drinkwater at 11:45