Strangetown 01.06: The Fabulous and the Specter

Yeah, I don't have any idea how to name my posts. There's some sort of hidden logic... Basically it's still the first generation of "my" CAS families. And I'm counting the rotations. Roughly. Anyway, back to the Fab', with a rare picture of Nina interacting with one of her children: 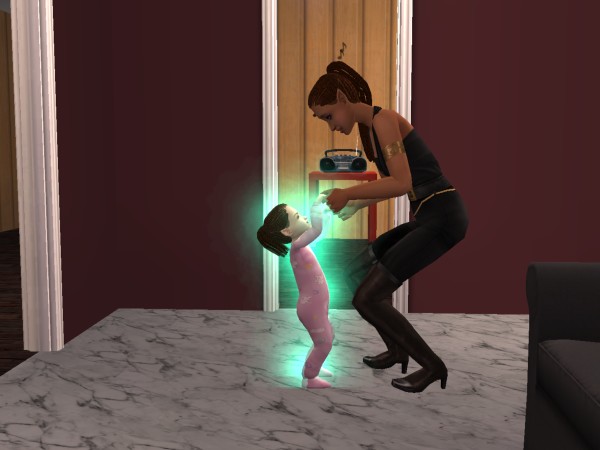 She's teaching Chaska to walk. Not that she's rolled the want, but *someone's* got to do it, and Yann is busy with Chloe at work.

Chaska's a fly-attracting, very playful toddler. She's also got a solid set of lungs and is not afraid of using them. I do struggle with the fly-attracting bit, to be honest. 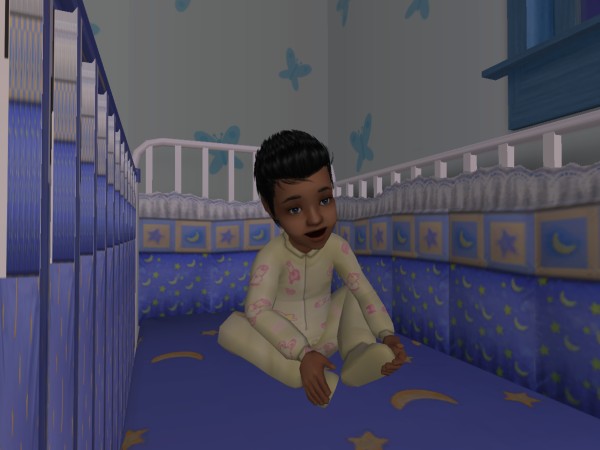 On the other hand, her twin brother, Antay, doesn't have lungs. 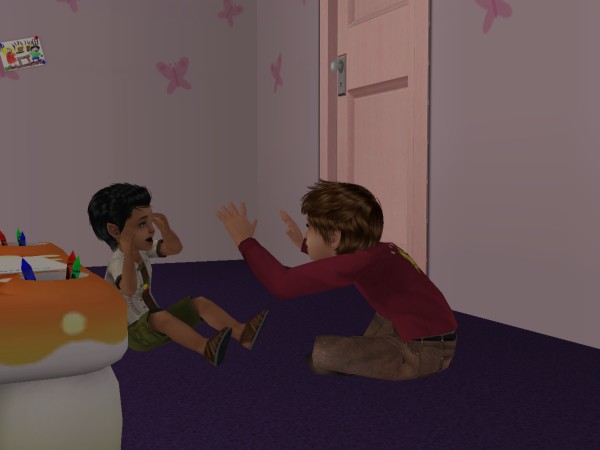 Marvin's a good big brother to both Antay and Chaska. 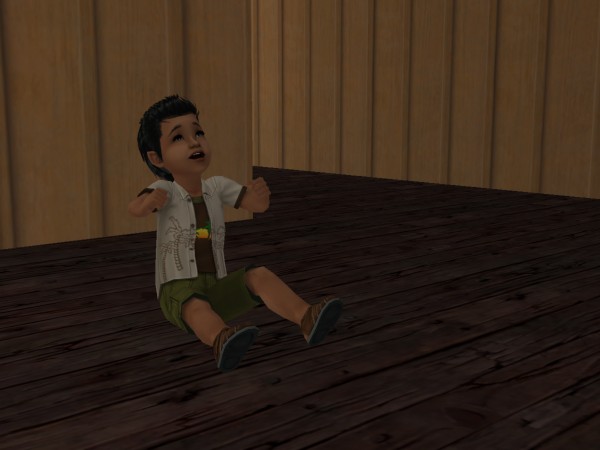 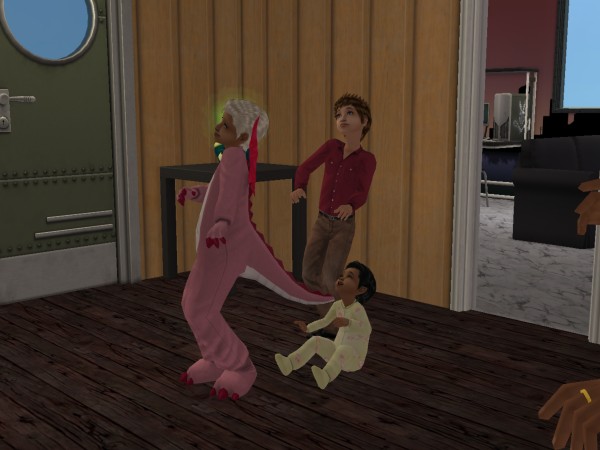 Ocean stopped by after school. That's cool, because everyone wants to be seen with Ocean. Besides kids are too adorable when they smustle :-)

You can see from this shot that they don't have much in the way of furniture. I'll try to get a better pic of their house next time - Nina's not a very happy Fortune Sim. I'm sad to say I still don't have many pictures... I just played them without pausing. I've installed Raptr since, but that'll still be a while away, blog-wise.

So hmm. That's it for now for the not-so-fabulous.

I still had another "Maxi" family to play... the Specters. Johnny wants Ophelia to go to Uni. Hey, why not? 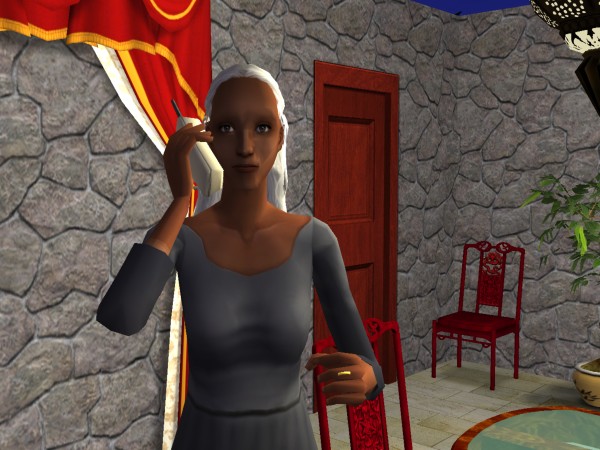 Olivia Specter's lifebar looks pretty short, so I get her to quit her job before she ends up in the front yard with all her other "friends". 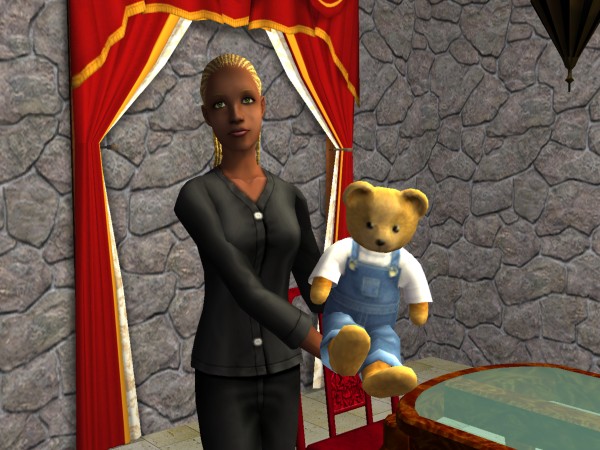 Ophelia keeps trying to talk to her aunt through Teddy. I wonder what she wants to say? 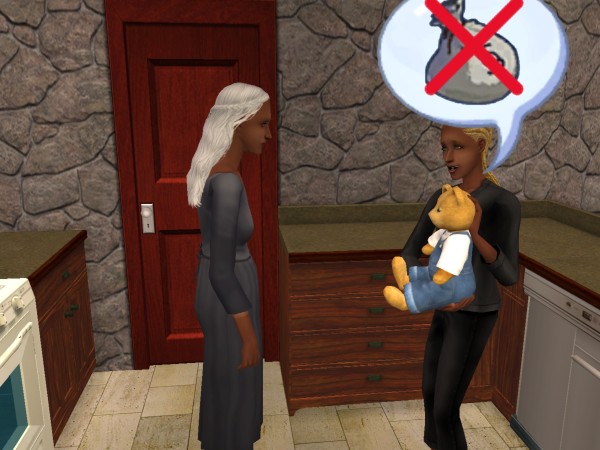 Right. That was just to remind the old lady that retirement doesn't pay that much, right after she retired. Subtle, Ophelia. Very subtle. 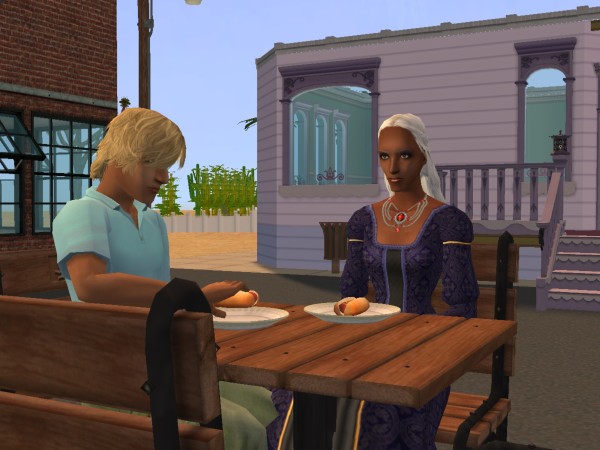 I sent Olivia to town to get her some new clothes and, hopefully, meet some interesting people. She's not impressed. 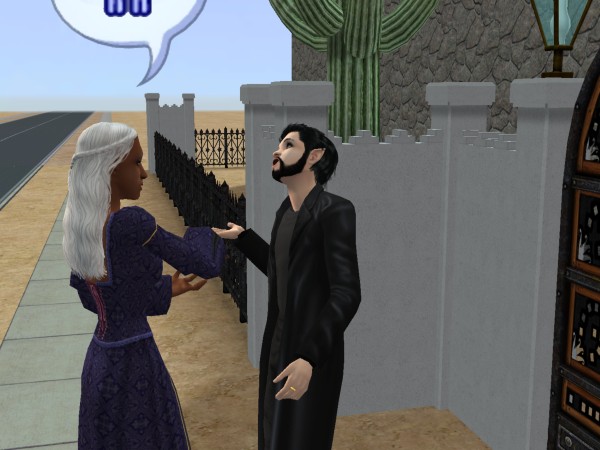 Now of course, the minute she comes home, she meets someone interesting. As in, two-bolt interesting. Cue "play with Yann" wants, "flirt with Yann" wants, and, why the hell not, "give a tender backrub to Yann preferably naked in the graveyard" wants. FFS. Did I hit the chemistry lottery with that one or what?

You know, I'm not exactly shocked by Ophelia playing with a teddy bear, or Yann for that matter, but Olivia? Really?

Yann eventually left with all his clothes on. I did have to stop Olivia from booty-calling him about 5 minutes later, though. *headdesk*

I don't have teens / adults romantic interactions enabled, or I suspect Ophy would be all over my Conchita as well. Anyway, it was getting late and Ophelia hadn't had dinner yet. She rolled the want to learn how to make TV dinner. OK then. Go ahead girl. Easy aspiration points. 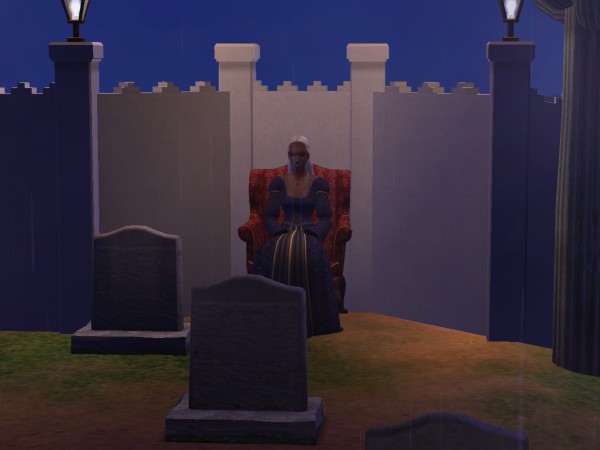 Yep, it's ghost o'clock. How convenient of Olivia to roll the want to see ghosts.

Argggh, puddles. Why did they have to drown?!?!? 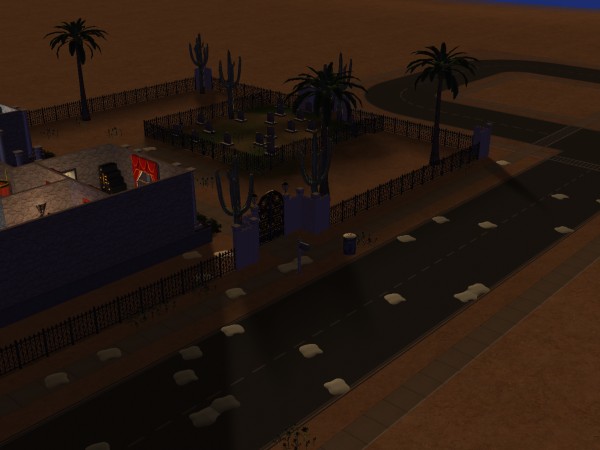 That's the result after just one night. So...
To be fair, I got Olivia to clean most of the puddles. To be also fair, she doesn't have that much longer to live and she can probably do something better with her time. To be thirdly fair, I quite fancy the maid.

I'm starting to see why they keep talking through the teddy bear. It makes the average Specter conversation seem a tad more cheerful. 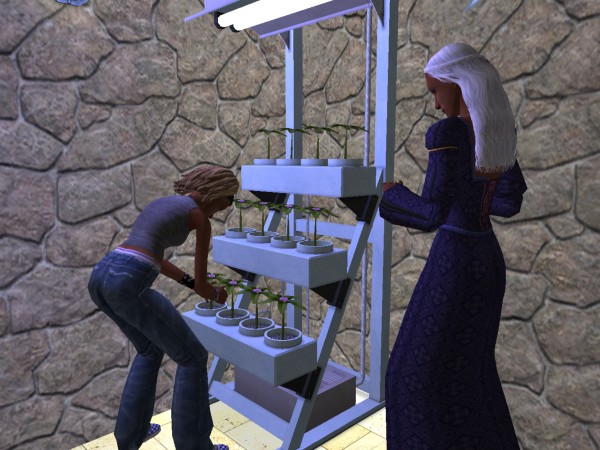 Ophelia starts with so little skill points one wonders how she manages to tie up her shoe laces or operate a microwave (...). Not 'specially Uni material, that one. I did my best to help with the limited time I had.

By limited, I mean it was already time for the ghosts again:
It was to be Ophelia's last night in her childhood bed.

That's Gabe Lim, by the way, a Secret Society member whose fashion sense is, uh, different. You'll see him every now and then in the main dorm, but that's for another update!

I'm not sure what I'll do with Olivia Specter. I kind of want her to live forever. She'd be the perfect vampire, even her house is vampire-friendly... But then she'd start turning townies, and I don't really want that. Hmm.

Next time: the Surprise family! They started it all, I have to play them every now and then :-)
Posted by Raindrop Drinkwater at 21:15