Typical first day at the Grunts, I suppose... I managed to get Ripp and Tank out of their poke-feast by giving Ripp (and Buck) something to do. 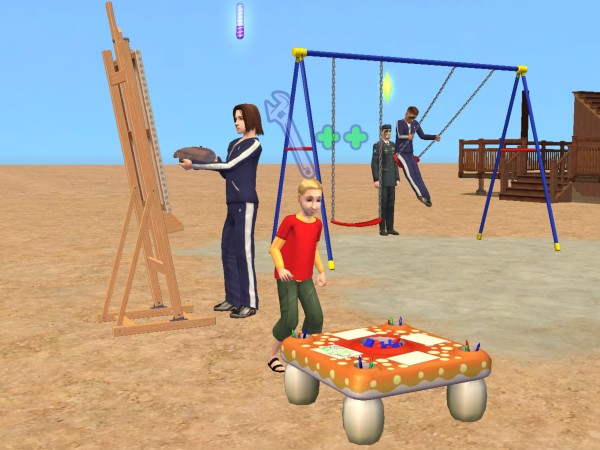 LOL at General Buzz's face. "I'm so proud of my son's achievements."
He's just playing on a swing, Buzzie. I admit he looks very gracious doing so. Still, it's just a swing!!!

I'm missing at least a couple of days here in the pics... Grrr @ me. 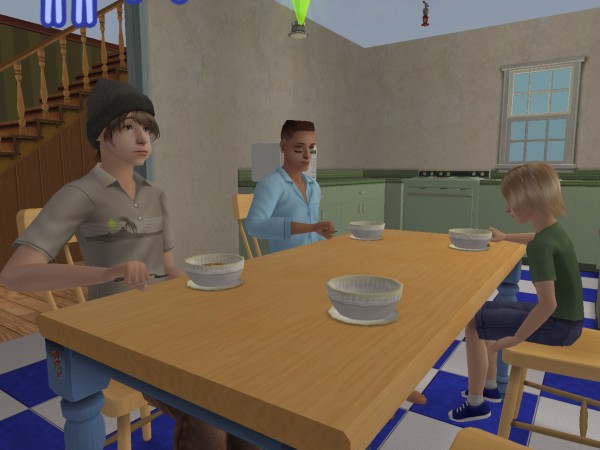 Ripp's awesome breakfast face. The kids get along rather well when they're not trying to kill each other.
You may notice I've already rearranged the furniture / walls a bit. I haven't touched the outer structure yet. I *like* the idea of that long house - it looks great from the neighbourhood view - but it doesn't work for me when I play it. I'll have to turn the house the other way round, eventually. 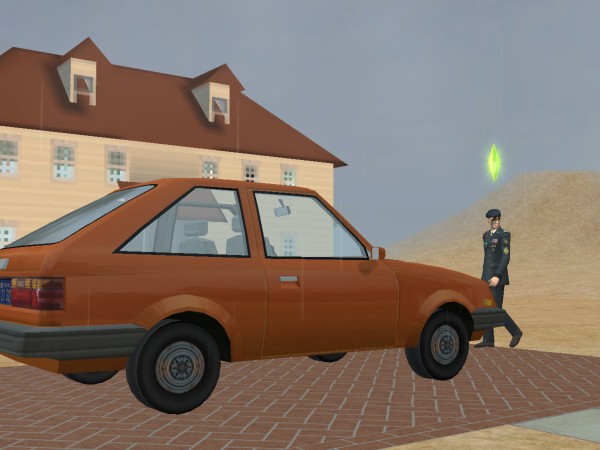 G.Buzz goes to work. In a crappy car. Because the helicopter is fun for, like, 5 minutes.
Btw, that big fella's lifetime want? Be best friend with 20 pets. Ha. Not gonna happen. It's not that I don't like pets, but I can't bear the idea of them growing old and dying... I'm only doing it with Cupcake at the Smiths's household, and it's gonna hurt... and I can't see you befriending 20 strays. Sorry, dude.

Everyone brings someone back home that evening: 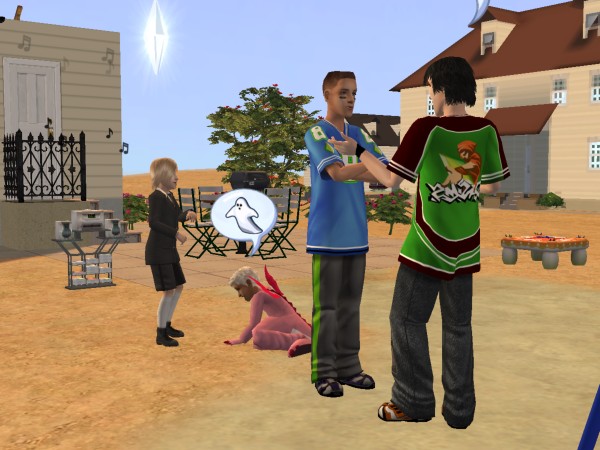 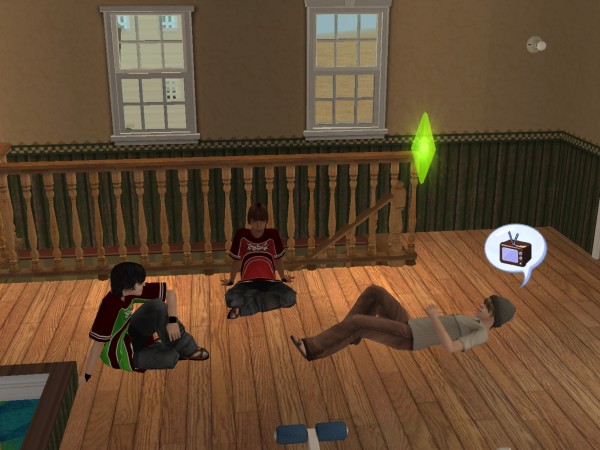 Ripp managed to get an A+... I'm shocked! He brought back another townie and rescued BJ from Tank's fascinating conversation. He hangs out, Ripp-style, super laid back and all.
"Yeah mates, I aced my grades because I watch TV all the time. Awesome."
"Wahhh dude!"
"Yeaaah...."

But don't let that pic fool you. Apart from that, Ripp's on the edge of aspiration failure all the time :-( 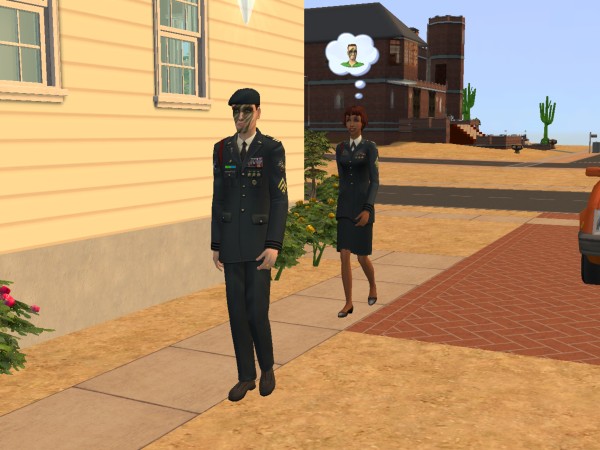 General Buzz also brings a coworker home. Namely, Ms Kristen Loste, of the dysfunctional Singles household. I saw what Kristen did to poor Checo Ramirez, so I'm not exactly surprised when this happens:
Well at least he made a friend. And so did Kristen. It's a win-win situation, isn't it? o.O 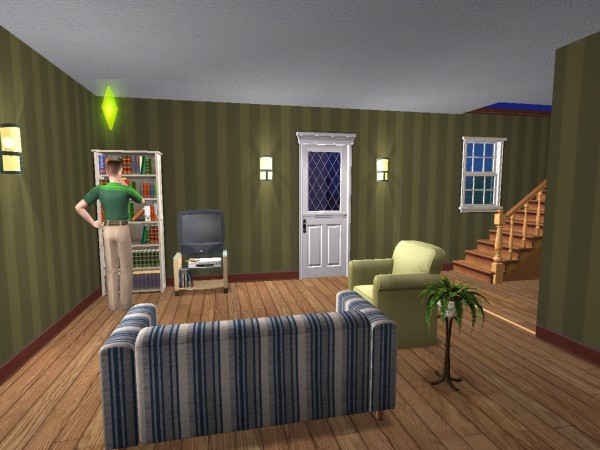 Random shot of the re-arranged living-room. I tried keeping it in the same style. 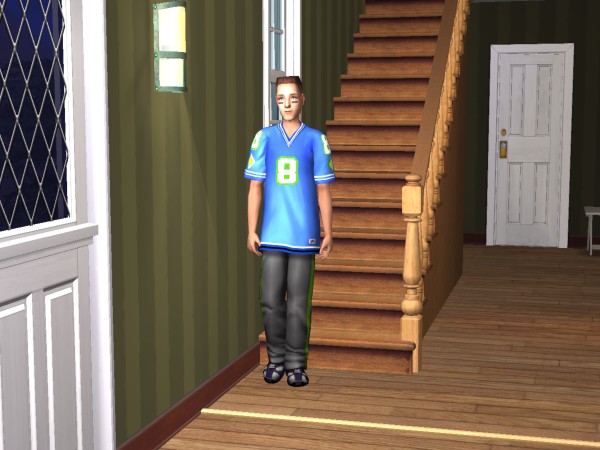 And it's time for Tank to move on to greener pastures... off to Uni! 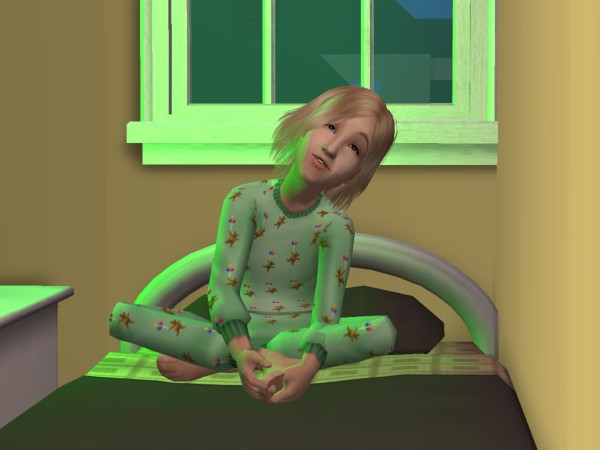 Buck's a very quiet kid. He daydreams, watches the fish, and is a fan of the cooking channel. And yet he's not boring... He's rather endearing, even. 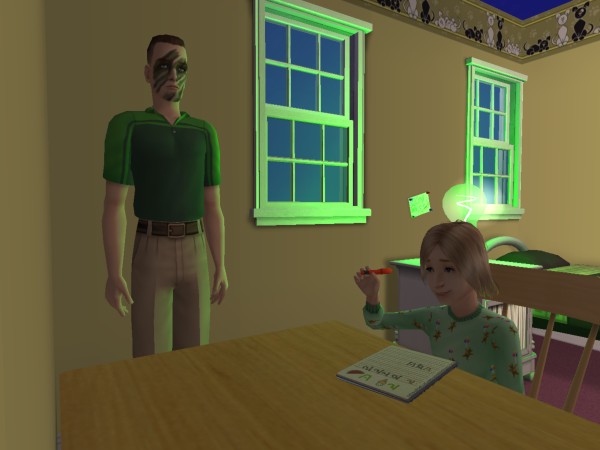 I put General Buzz to work. His needs are tanked most of the time - he's hungry, sleepy, and needs to poop. But I have other priorities.

His kids don't have a mother anymore - and he's grieved long enough. Time to catch up on all those milestones he's missed. He first taught Tank to study, who then taught Ripp (would you believe these two are friends now? And I didn't even micro-manage them). He's now watching over Buck's homework. And he's not even too unhappy about it.

Before we leave the Grunts, some extra pics:

The first person Tank meets at Uni is... you guessed it... Johnny Smith. It didn't go too badly.

I love that pic. That's a "studio" pic, meaning I did it in windowed mode before I installed Raptr. I even created a sim, Nicephore Daguerre, for the sole purpose of teleporting to his house the sims I wanted pics of.

That's one of the rare times I turn free-will off. But at this point, both Ripp and Tank were still on free-will, hating each other's guts. And Ripp did something unbearably cute: he waved at his big brother. With that cute smile of his. Making *me* melt down. GAAAAAHHHH!


Hmm. Tank looks a lot like Buck, doesn't he? Very dreamy, I mean.

You know, when I started playing the Maxis families, I didn't expect to fall in love with them. These households should come with a warning. :-/

Next? My guys again: the Fabulous, and a bit of the Specters because Ophelia has to hoof it to Uni too.
Posted by Raindrop Drinkwater at 10:56